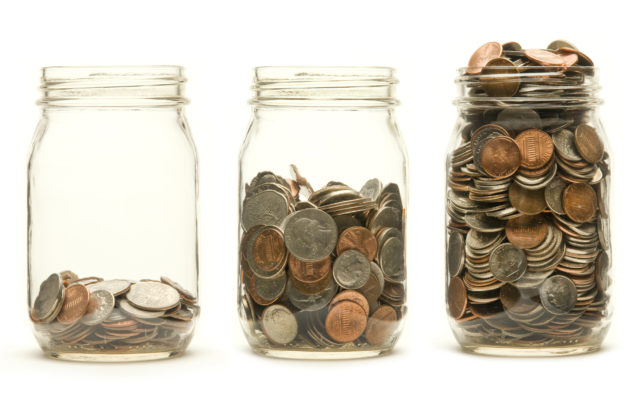 Increasing numbers of American coins in a three glass jars against a white background
Experts are saying that those who are concerned about the trend of some businesses not accepting cash as payment should not worry that there is some attempt to move to a cashless society.
What businesses really want is your change. As the nation faces a coin shortage, some retailers are asking customers to pay using exact change, or pushing debit and credit card payments as the ideal payment option.
But other retailers, including big retailers such as Target and Lowe’s, are putting signs in their windows asking customers to turn in rolled coins for the equivalent in bills plus a free soda or sandwich.
The coin shortage has been caused by people who would normally pay cash at stores staying home during the early days of the pandemic.
Mark Hamrick, senior economic analyst at Bankrate.com says, “Cash is not moving as quickly and freely across the economy as it normally would.” The Federal Reserve is even encouraging banks to order only the coins they need to meet near-term customer demand and help replenish supplies by removing barriers to consumer deposits of loose and rolled coins. Experts say the coin shortage should be “short lived” and note, “It should correct itself.”
Source